This skill will give you access to various abilities and buffs of a magic/alchemical nature!

How To Increase Your Sorcery Level?

Brew up a load of potions! 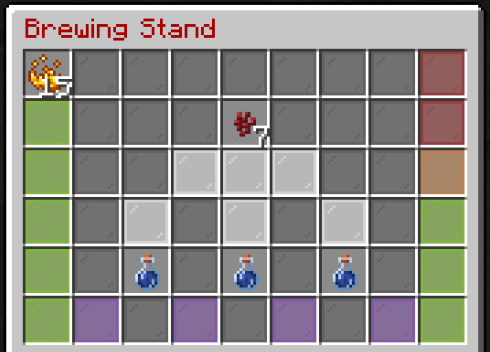 In order to efficiently work with brewing, including adding new potions correctly - McRPG replaces the brewing GUI with it’s own custom GUI.

This works mostly exactly the same as a normal Vanilla brewing GUI. Put your fuel in the top left slot, your bottles in the three empty slots and your ingredient in the top middle slot.

These are items you can gain while brewing. Each Artifact has a different use:

In theory yes - these artifacts should be sellable/auctionable if you don’t want to use them yourself. If they are - great use for the auction house - hint, hint.

What is the Sorcery Skills Default Ability?

This grants a boost to the brewing speed of your potions.

These abilities just need to be in your active loudout for their effects to be active.

This allows you to brew new potions at each tier.

What Sorcery Level does Tier 1 Unlock?: 50

As the Tier of this ability increases you will gain access to new potions to brew.

This adds a boost to how long any potions you drink yourself last for.

As the Tier of this ability increases, so does the boost added.

This increases the chances of receiving artifacts while brewing.

As the Tier of this ability increases, so does the added chance for artifacts.

This grants you a chance to resist negative potion effects.

As the Tier of this ability increases, so does the chance of negating negative effects.

This provides a boost to XP gains in Nether worlds (for both McRPG and Vanilla XP).

As the Tier of this ability increases, so does the boosted XP amount.

This allows you to build a shrine by placing Quartz Ore on all four sides of a block of water.
If you then throw diamond blocks into the water (the more blocks the better) you have a chance of converting some of your Vanilla XP into redeemable McRPG experience.

What Sorcery Level does Tier 1 Unlock?: 350 What is this Abilities Cooldown?: 4 Hours