McRPG is an alternative to that skill plugin you will probably know from 90% of servers out there (mcMMO).
While LegionCraft did utilize mcMMO for it’s skills and abilities for a very long time, it’s become too expected and stagnant - when so many servers utilize the exact same feaures…. what’s the point!

So when we took the plunge to give the server a reset/rework for the Minecraft 1.16+ update, and a number of other features were either removed or changed up - mcMMO was also up for the chop! However - we didn’t want to completely remove the feature of skills/abilities for players to enjoy, so an alternative was required.
And this is where McRPG comes into play. It uses a similar base train of thought to mcMMO, and even a couple of the same abilities (though tweaked a little), but works very differently and with a lot more going on for players to mess around with and enjoy using.

While there’s no possible way this wiki will ever have every tiny bit of information on McRPG listed (as with almost everything else on this wiki, it’s mostly the main/core parts that you’ll want to know and the rest you can figure out ingame or by asking the staff) we will keep a semi-detailed list of each skill, the abilities that skill will grant you and how McRPG works in general.

McRPG adds a number of skills for you to level up and unlock new abilities for, of which you can only have a set few active at once, and these can be managed very easily through the /mcrpg GUI:

– Your Profile: This is the skull icon in the /mcrpg menu. When you hover over this icon it will give you a run down of your current power level and the level of each of your skills.

If you then click on this icon it will take you to a page of some options you can toggle on/off. For example, just a couple of these options are:

– Skill Menu: This is the sword icon in the /mcrpg menu. When clicked it will take you to this page: 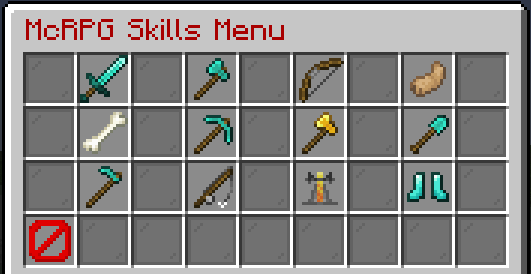 Note that this menu may look different as the plugin is developed and more skills are added.

From here you can hover over a skills icon to see your current level and the chance you have for the skills default ability to trigger, and if you click the skills icon it will list all abilities that skill has with a small note on what they do and when they unlock!

–Upgrade Abilities: This is the nether star icon in the /mcrpg menu.
When clicked it will list all of the abilities you have unlocked - if you have met the requirement for upgrading the ability (for example to upgrade the Puncture ability from the Archery skill to Tier 2, your Archery level must be 150+) then you can click on the ability to upgrade it!

As you upgrade your abilities they will become more useful with longer effects, more strength, a higher chance to trigger etc… What each Tier of an ability grants is listed on each Skills page linked further down this page.

–Edit Ability Loadout: This is the compass icon in the /mcrpg menu.

When clicked you will be given some options as to what you want to edit in your loudout - from these you can:

McRPG grants you access to 12 Skills currently - each with their own abilities you can level up and include in your loadout to customize your gameplay to your own style a little.

Each skill levels up as you do certain actions.
As the skill reaches a certain level it will start to unlock it’s abilities (aside from their default ability, which just requires yout o be level 1 in a skill) on their first Tier.

To increase the Tier of an ability you require two things - each Tier upgrade requires the Skill it belongs to to have reached a certain level, and an ability point to do the upgrade itself!
You will receive an ability point every 150 level of your Power Level (the Power Level is the total of all of your Skills levels).

Currently you have access to use the following skills:

As with mcMMO before it, you can create a Party with various perks between yourself and those in the same party as you!

To create a party use the command /mcparty create <party name>.
Once you have created a party you can open a GUI with information on and options for your party with /mcparty, like so:

These options allow you to:

You will get an upgrade point every 3rd level as your party level increases (it increases as players in the party earn McRPG experience) up to the max level of 45.
This gives you a maximum of 15 upgrade points, meaning you cannot fully upgrade your party (as this would take 20 upgrade points).

From the Party Upgrade page of your /mcparty GUI you can upgrade one of 4 things for your party, and each of those 4 options can be upgraded up to 5 times.

NOTES:
If you disband a party that still has items in the Private or Party Banks - YOU WILL LOSE THE ITEMS. They cannot be recovered.

If you are offline for more than 7 days you will also be removed from your active party (if this is the owner if the party I assume this will disband the party - so bare this in mind!).

You can view a little but of information on a skill, such as your currently level and XP to the next level, via the /mcd <skillname> command.

If/when you have received any redeemable experience or levels you can redeem them for a set skill via the /mcredeem <skillname> command.

Please Note:
This is a BETA plugin. It is still heavily in development, and there may be issues - if you run into any report them via the ingame /tickets or on the Discord in the relevant channel and we will inform the plugin developer if it is not something we can fix via the plugin configs.